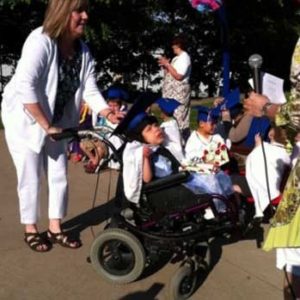 In September 2008, Kymiah was one year old. She was a tiny little girl with a head the size of a cantaloupe and a diagnosis of “brain stem baby!” She surpassed her life expectancy of 3 months and the doctors were scratching their heads at her and calling her a miracle.

We visited several day cares before we walked through the doors of Wee Care. I knew right away that this was the place for my Kymiah. Bright and cheerful and bustling with activity, friendly staff and services that were not available anywhere else. The first few days were difficult – leaving her all day with people I didn’t know, who didn’t know here, or so I thought. It wasn’t long before I realized that the staff took great care to understand her and try and figure out what things that she responded to.

I had been told (and believed) that Kymiah was blind and deaf, but one day her day care teacher stopped me as I came to pick her up. She told me that another child had kicked an apple toy that had a bell in it. Kymiah heard it, turned her head and smiled! So began the journey I can only describe as miraculous.

Kymiah began to go to music therapy and it became clear that she was responding to a variety of sounds. As she progressed (and the progress was indeed slow but steady), she began to smile and laugh. One day, she started to make noises as Anna played certain songs. Music became the stimulus that to this day motivates her to “sing” and move. She had even begun to “strum” the guitar without assistance.

When Kymiah started at Wee Care her limbs were completely stiff, her legs and arms were bent and frozen in an almost fetal position. Along comes physio and occupational therapy, who began to gently move and massage her limbs, adding splints and braces to her routines. She complained and grumbled about the movement, but they persevered and eventually she began to open her hands. Hip surgery and more physiotherapy and she had some movement in her legs. The therapists initiated all of her exercise and splints/seating, and the staff were diligent every day to carry out their instructions with care and love.

As I sit here writing this, Kymiah is sitting in her bean bag chair, “talking and laughing” at her favourite DVD. She is almost 8 years old and getting ready for grade 2. She has learned to communicate, in a very primitive way with the people in her life and there is little doubt what she wants and responds to.

Had it not been for the specialty services offered to her and our family through Wee Care Developmental Centre, I doubt that Kymiah would be here. I know for certain that she would not enjoy the quality of life that she has and we, her family and friends would never have known the joy that this little girl brings to everyone around her.

The joy of Kymiah’s story isn’t all about her though. As I have been involved with Wee Care ever since. I have seen the same kinds of things happen with many, many children. Parents who were told their children would never crawl, walk across the lawn to receive their graduation certificates. A child who would never talk, say “I love you Mommy.”

Little miracles – because a group of dedicated people refuse to accept “it will never be.”